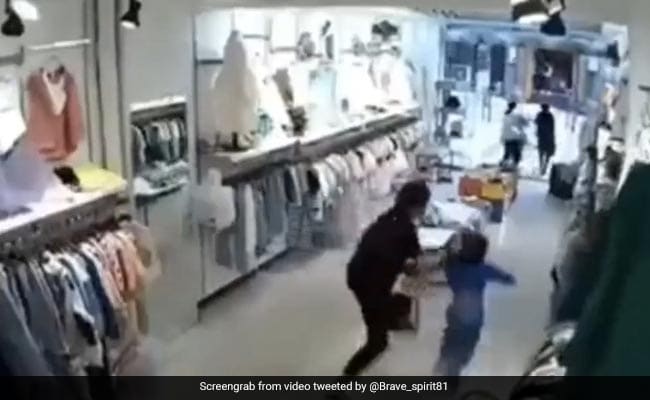 According to the China Earthquake Network Center, or CENC, the earthquake shook the Lushan district of Ya’an city at 5 p.m. local time.

A video on Twitter showed a woman and a child inside a clothing store rushing out as the quake began. Another video showed a stretch of road where motorists, suddenly faced with the shaking ground, stopped and ran towards the middle of the road to escape falling debris.

The epicenter was 17 kilometers deep, CENC said. The earthquake was followed by a 4.5 magnitude tremor three minutes later in Baoxing County, Ya’an City. Four people were killed and 14 others injured, the state-run People’s Daily reported. Four people died in the earthquake from being hit in the head by a falling rock.

Videos and photos on social media showed the quake and its aftershocks causing landslides, damaging buildings, including those built for those affected by the quake 7 ,9 on the Richter scale in 2008 in the province located on the Tibetan plateau.

Students ran out of their classrooms while residents ran into the street as the earthquake rocked the area, followed by a series of aftershocks.

Telecommunications systems in parts of the two counties were damaged by the earthquake, but some fiber optic lines were restored after emergency repairs, PTI reported.

Ya’an has activated the second highest level of emergency response to the earthquake and is conducting a damage assessment.

More than 4,500 personnel from emergency rescue and other departments were dispatched to the earthquake-affected areas.

The provincial earthquake management agency said the 6.1-magnitude quake in Lushan was an aftershock of a 7.0-magnitude quake that killed more than 100 people and injured thousands in 2013.

Sichuan province was hit by China’s most severe 7.9-magnitude earthquake in 2008, killing 90,000 people.

With input from PTI ISIS Claims Responsibility For Blasts On Minibuses In Afghanistan Elon Musk denies he talked to Putin about the Ukraine war