Techland released Dying Light, its zombie parkour game, back in 2015, and surprisingly the game has received support from the studio for over seven years. This year, Dying Light has received a new generation performance patch and Seventh Anniversary DLC as free weapon skins and more.

Today, however, Techland revealed that their support for Dying Light is coming to an end, but not without a final surprise. The studio has given the game its full support in the brand new Dying Light: Definitive Edition coming out tomorrow.

“Dying Light has been an amazing journey and we’re grateful to the community that has supported the game with us over the past seven years,” reads a press release. “However, we also understand that the sheer number of updates and DLC released for our game can be daunting for new and old players alike. We don’t want you to miss out on any. part of the full Dying Light experience. That’s why we’re proud to present Dying Light: Definitive Edition.”

As mentioned earlier, the Dying Light Definitive Edition is out tomorrow and will go live with “up to 70% off.” It will be available on all platforms as a digital release. However, the Switch version later released as both a digital and retail release. This release includes the base game and all of its 26 DLCs, including skins and expansion packs, and Techland says, “it’s the best way to experience the amount of content and love we’ve been given. poured into this game for seven long years.”

To thank everyone for supporting the game, the studio is releasing one last free DLC called the Harran Tactical Unit Bundle, and it will be available for two weeks, starting tomorrow. If you already own a Platinum Edition of Dying Light, you’ll automatically be upgraded to Ultimate Edition for free, giving you five new plans at no extra cost. 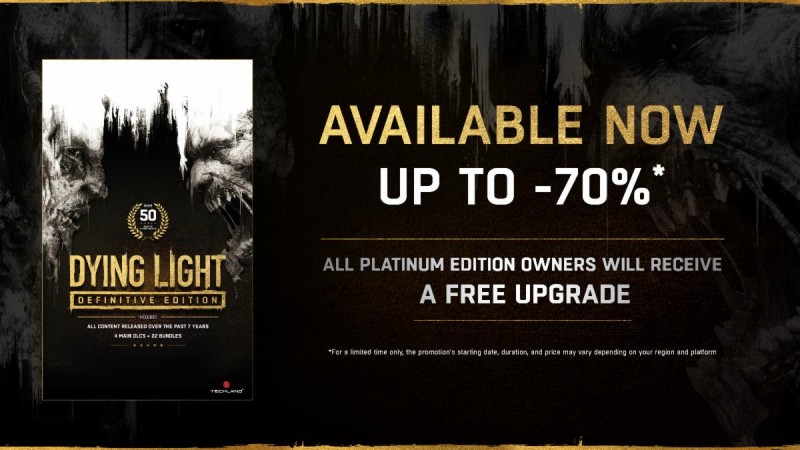 Techland wrote a heartfelt letter to its fans to round out today’s news. Here it is, in full:

“This release marks a pivotal moment in Dying Light’s history. On the one hand, it’s a nod to 7 years of immense love and support for the game; on the other hand, it’s final installment of our adventure in Harran. But let’s see what the future brings. And don’t worry — we’ll be regularly updating previous events for you to enjoy.

Once again, we couldn’t be happier with the inspiring memories this game has given us, mainly because of our amazing community. And yet, we also feel this is the perfect time to move on and shift our focus to brand new adventures in Villedor.

Are you going to buy Dying Light: Definitive Edition? Let us know in the comments below! Celeste has a beautiful new collection for its fifth anniversary