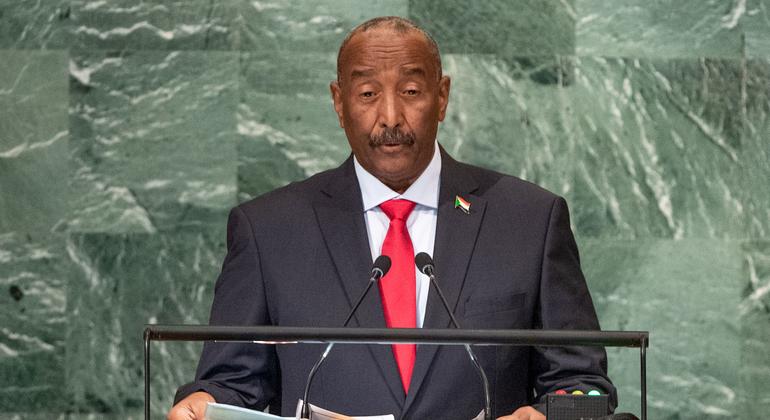 Regarding recent political developments in Sudan, he reiterated his commitment to a peaceful transition to the establishment of true democracy, including fair, free and transparent elections at the end of the transition period, to establish a civilian regime representing all Sudanese people.

The Sudanese president went on to say that starting in July, his country’s military was asked to withdraw from negotiations aimed at resolving the ongoing political crisis following last year’s coup, allowing the forces revolutionary political force to establish a civilian government. This will be an independent government and fulfill the rest of the requirements during the transition period.

He reaffirmed Sudan’s commitment to cooperate with UNITAMS in accordance with uncharted and its mission by Security Council and is consistent with the list of requests that Sudan submitted to the UN to promote the transition. He added that cooperation will continue with UNISFA.

President Al-Burhan stated: “In order to promote national understanding, we have provided all necessary support to the AU-IGAD-UNITAMS Tripartite Mechanism, which has done a lot, but still have not achieved what is needed. This has made national consensus debates more complicated.”

He emphasized how the signing of the Juba Peace Agreement has reduced the conflict in Darfur and brought some stability and security to the region. In Darfur, the rate of voluntary return of displaced persons has also increased. The Sudanese leader appealed to the international community for help and support in the exercise of rights under the Juba Peace Agreement.

President Al-Burhan emphasized how Sudan is working to improve security, development and peace in the African region, along with South Sudan, Somalia, the Democratic Republic of the Congo (DRC) and Chad and other countries. Other countries. He added that Sudan is the coordinator with the African Union to reach a peace agreement in the Central African Republic. Sudan is also working with stakeholders to maintain security in Libya.

In this regard, the Sudanese official pointed out that the transitional government has adopted a “strategic document on poverty reduction for the period 2021-2023”.

Mr Al-Burhan said that external debt “is an obstacle” for his country and limits its efforts to continue to achieve economic and social development. This also hinders the implementation of the Sustainable Development Goals.

He added that Sudan is already eligible to benefit from the Heavily Indebted Poor Countries (HIPC) initiative, which calls on the “international community and brotherly and friendly countries to fulfill the commitments that they made in the Paris and Berlin meetings, noting that Sudan has completed all the legislation necessary to benefit from the debt relief. ”

Concerning the four million refugees in Sudan, Al-Burhan called for greater international support to address the situation of the refugees and the local communities hosting them.

He concluded by highlighting another Sudanese priority: the need to control the proliferation of small arms and small arms.