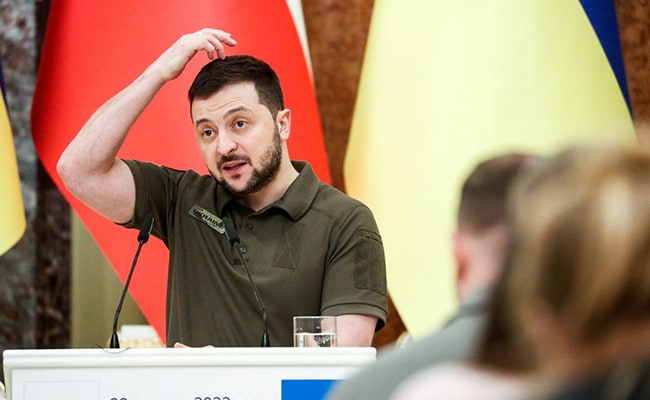 President Volodymyr Zelensky said Ukraine would win the war started by Russia on Friday as Moscow’s invasion of the neighboring country entered its 100th day with Russian troops attacking the Donbas region.

Thousands of people have died, millions have fled and towns have been reduced to rubble, since Russian President Vladimir Putin ordered his troops into Ukraine on February 24.

Russia’s advance was slowed by fierce Ukrainian resistance that pushed them back from areas around the capital and forced Moscow to shift its focus to capturing the east.

Since then, Russia has occupied one-fifth of Ukraine’s territory – tripling the amount occupied since 2014 when it occupied Crimea and parts of the Donbas.

Kremlin spokesman Dmitry Peskov told reporters that “certain results have been achieved”, while pointing to the “liberation” of some areas from what he called “armed forces”. Ukraine’s pro-Nazis”.

However, Zelensky said Russia would not prevail when it came to appearing in a video featuring key political leaders also featured in a video posted on February 24 when it announced it would defend your country.

“Our team is much bigger. Ukraine’s armed forces are here. The most important thing – the people, the people of our state are here. Defending Ukraine has already been 100 days,” he said. .

“Victory will be ours,” he declared in a show of defiance in the video set against the president’s office building.

Putin’s army is now concentrated in the Donbas, in the east, where some of the fiercest fighting is centered on the industrial heartland of Severodonetsk.

The presidential office said fighting continued in the city center of Severodonetsk, adding that the invaders were “barring shells on Ukrainian military and civilian infrastructure”.

“Severodonetsk is the most difficult region at the moment,” said Mr. Zelensky.

“In 100 days, they leveled everything,” Lugansk region governor Sergiy Gaiday said on Telegram.

However, accusing the Russians of destroying hospitals, schools and roads, Gaiday said that “we are only getting stronger.

“Our hatred of our enemies and our belief in victory make us unbreakable.”

Gaiday said the Ukrainian military is still holding onto an industrial zone, a situation reminiscent of Mariupol, where a steel mill was the last station of the southeastern port city until the last of the Ukrainian army. surrender at the end of May.

The situation in Lysychansk – the twin city of Severodonetsk, located just across the river – is also becoming increasingly dire.

City mayor Oleksandr Zaika said about 60 percent of infrastructure and housing had been destroyed, while internet, mobile networks and gas services had been removed.

“The shelling is getting stronger every day,” he said.

In the city of Sloviansk, about 80 kilometers (50 miles) from Severodonetsk, the mayor urged residents to evacuate as bombings increased and power and water were cut.

Student Goulnara Evgaripova, 18, recounted the heavy bombardment as she boarded a minibus to leave the city.

“The situation is getting worse and worse, the explosions are getting stronger and the bombs are falling more and more,” she told AFP.

And in Mykolaiv to the south, Russian shelling has killed at least one person and wounded several others, Ukrainian military officials said late Thursday.

“This war has and will not be won,” Amid Awad, the United Nations Assistant Secretary-General and Crisis Coordinator on Ukraine, said in a statement.

Led by the United States, Western nations have been pumping weapons and military supplies into Ukraine to help it survive the onslaught.

Earlier this week, the United States announced that it was sending more advanced missile launch systems to Ukraine, part of a $700 million package. The Kremlin accused Washington of “adding fuel to the fire”.

Western allies have also sought to cut off Russia’s financial lifeline in an attempt to get Putin to change course.

Given an already long list of sanctions, the United States on Thursday blacklisted Putin’s money manager and a Monaco company that supplies luxury yachts to Moscow’s elite.

Across the Atlantic, EU nations have agreed to new sanctions that will block 90% of Russian oil imports into the bloc by the end of the year.

Russia warned that European consumers would be the first to pay the price for the partial oil embargo.

Major crude oil producers have agreed to increase output by about 50% per month in an effort to calm an overheated market and ease pressure on inflation.

But the move disappointed investors, and prices rallied after the announcement.

With a global food crisis looming, the head of the African Union, Senegalese President Macky Sall, will travel to Russia on Friday for talks with Putin.

Ukraine is one of the world’s top grain producers, and the war has increased the cost of staples from cereals to sunflower oil to corn, with the poorest among those affected. hardest hit.