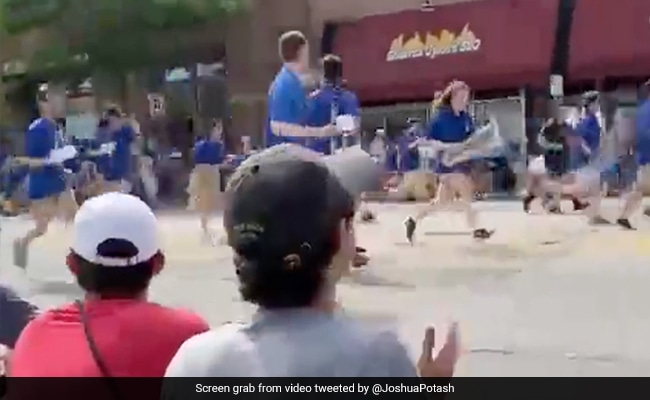 Multiple people are believed to have been shot when a gunshot broke out near the 4th of July parade in suburban Chicago. According to local reports, a gunman opened fire from the roof of a retail store at the parade below just minutes after the celebrations began.

A video on social media showed marchers suddenly fleeing in panic as shots were fired in the streets of Highland Park, a wealthy suburban city. Families were seen sitting on the sidewalk watching the parade. In the next frame, they are seen jumping from the ground and running, a voice shouting “gunshot” can be heard in the background.

The moment the crowd realized there had been a mass shooting in Highland Park, Illinois, at the Fourth of July parade. Unfortunately, there is nothing more American than this tragedy. pic.twitter.com/beXt9uYP3F

The shooting happened “in the area of ​​the Independence Day parade route,” the Lake County Sheriff’s Office, which has responsibility for the area that includes Highland Park.

We are assisting the Highland Park Police in carrying out a shooting in the area of ​​the Independence Day parade route. OUT OF THE AREA – allow law enforcement and first responders to do their job. pic.twitter.com/PTut6CGZAe

It is not yet clear how many victims or deaths have been reported.

Illinois State Police were on the scene. They called the incident an “active shooting situation”.

According to the Gun Violence Archive website, guns cause about 40,000 deaths each year in the United States, including suicides.

The debate over gun control – a deeply divisive issue in the country – was rekindled by two massacres in May that saw 10 Black supermarket shoppers shot to death in the suburbs. New York suburb and 21 people, mostly young children, were killed at a Texas elementary school.

Congress passed the first major gun safety bill in decades after those killings. President Joe Biden signed it into law at the end of June, saying that while it lacks what is truly needed, it will still save many lives.

With input from AFP. Ukraine conflict is not your chance to go viral