Thousands are still lining up to pay their respects, as heads of state continue to arrive in London ahead of Monday’s funeral.

Irish President Michael D Higgins and Taoiseach Michael Martin are expected to join those who signed the official condolence book at Lancaster House.

The King will host an audience with Prime Minister Liz Truss at Buckingham Palace before he and the Queen received foreign dignitaries there afterwards, in what has been described as an “official state event”.

The Queen’s grandchildren stood in prayer around her coffin; The funeral will be shown on big screens across the UK – all the latest news, live

A reflection service for the Queen at the Kelpies sculptures near Falkirk, Scotland, will see 96 lanterns, one for each year of the Queen’s life, lowered into the reflection tank at the foot of the Women’s Canal Queen Elizabeth II, before the wreath was placed in the water. 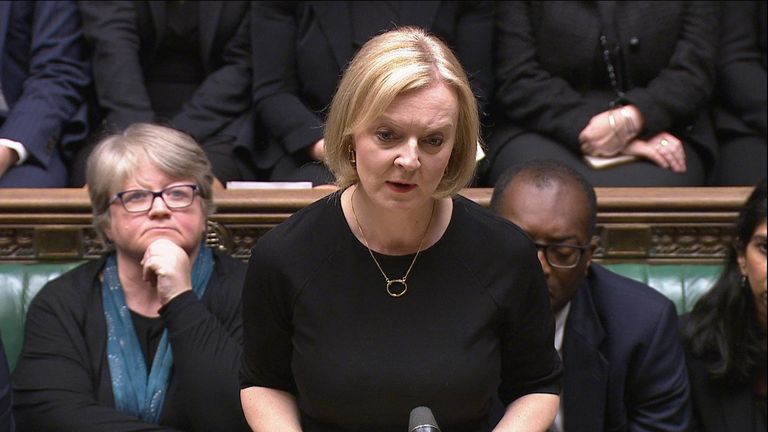 Truss said: ‘The Queen is one of the great leaders’

In the photo: The Queen over the years – a life of public service

A pre-recorded tribute to the late monarch by Queen Consort will be broadcast on the BBC shortly before 8pm.

Afterwards, members of the public will be invited to observe a one-minute silence in memory of the Queen.

The period of status will end at 6:30am on Monday, which will be a national bank holiday to allow as many people as possible to watch the Queen’s funeral, will be shown on big screens across the UK, including at Hyde Park in London; Centenary Square in Birmingham; Coleraine Town Hall in County Londonderry, Northern Ireland and Holyrood Park in Edinburgh.

It will also be broadcast live in around 125 cinemas and several major churches across the UK.

The Guinness World Record was set at 1:15.18 for fastest reverse mile