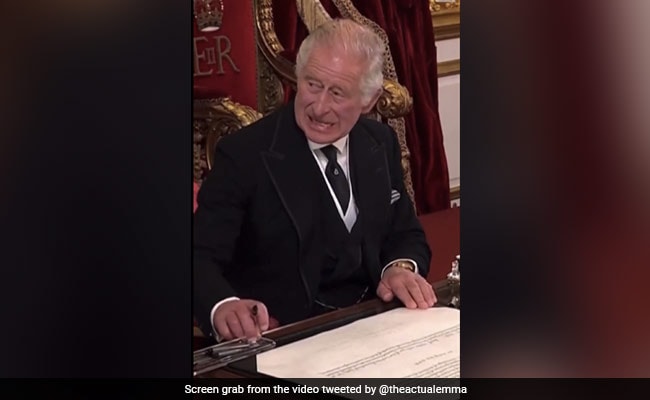 Charles III was announced by the Accession Council as the new king of England on Saturday.

Video of an “excited” King Charles III went viral on the internet after the new monarch was caught grimacing and gesturing towards royal aides during a ceremony to officially declare him King.

After the death of Queen Elizabeth II on Thursday, the Accession Council issued an official statement by King Charles on Saturday. However, just before signing the Declaration of Accession, the king found himself frantically sending aides to clear his desk to put his name on the documents.

Watch the video below:

Charles covered up the wind at the time of his enlistment by wavering and blaming the pen and ink tray for eh, pens and ink. pic.twitter.com/ZfW3cNPMIN

In the clip, King Charles expressed frustration when leaving both the pen case and ink bottle on a small table that also had to fit large documents. He motioned to his assistants to clear the desk, which led to the rearranging of items.

After the documents were placed, King Charles again signaled to an aide to remove the pen case from the table, making room for him to sign the historical document.

Signal the assistant through clenched teeth to move something out of his way pic.twitter.com/SSe8j8VeUz

This awkward moment caught the attention of some social media users. While some found the moment humorous, others found it surprising. “First day at work and he’s fed up. LOL,” one user wrote. “With this situation, I’ll be upset too,” another added.

Meanwhile, during the ceremony, the 73-year-old king was officially sworn in as the new king, saying he was “deeply aware” of the “heavy duty and responsibility of the sovereign”. He said his mother, who died Thursday in Balmoral, “set an example of long and selfless service for a lifetime” that he promised to follow.

“As the queen herself has done with such unwavering devotion, I now solemnly pledge myself, for the rest of the time God-given to me, to uphold the constitutional principles of the heart of our nation,” King Charles said in his first address to the nation. Saturday.

Everything Our Editors Saw at NYFW (So Far)