Property magnate Jamie Ritblat is battling UK tax authorities over tens of millions of pounds that HM Revenue & Customs claims are owed to him and his property investment firm, Delancey.

HMRC claims income and employment-related taxes owed over £141m in profits from Delancey’s flagship fund paid out from a trust for 24 employees, including Ritblat.

Payments start a few months later HMRC accepts only £400 in a 2015 agreement that prohibits the agency from collecting more tax from the trust or Delancey’s beneficiaries.

HMRC now alleges the settlement was reached on the basis of Delancey’s false statements and trust through EY advisors and the law firm Olswang during the settlement negotiations.

The dispute threatens to cast a shadow over one of the UK’s most prominent property investors, with a portfolio spanning some of London’s biggest renewable projects, such as the Earl’s project Court.

Ritblat and Delancey have asked the High Court to keep HMRC under the 2015 agreement, which would leave £141m tax-free beyond the £400 payout. HMRC sought to tear up the agreement.

In a court filing in June, HMRC said it was not “at this stage” alleging the 2015 false statements were made fraudulently or recklessly.

“Unfortunately, proceedings had to be brought against HMRC because they violated the terms of the agreement regarding employee benefits opportunities that they made public,” Delancey said. and provide hundreds of employers and trusts.”

The company added: “We believe this agreement is valid and strongly reject the allegation that the misrepresentation was carried out by the trustee, professional advisors and Delancey.”

“We are committed to ensuring that everyone pays their taxes as required by law,” HMRC said.

Law firm CMS, which merged with Olswang in 2017, said: “HMRC made no allegations of misconduct against CMS (formerly Olswang) and there was no basis for them to do so.” .

“We strongly reject any suggestion of misconduct by EY,” EY said.

The son of Sir John Ritblat, who has grown British Land into a multi-billion pound landlord and developer, Jamie Ritblat has built a reputation for himself since launching Delancey in 1995.

Ritblat’s landmark deals come in the wake of the financial crisis: Delancey took rival developer Minerva private in 2011 and split the company’s assets, before buying the Olympic Athletes’ Village 2012 in Stratford, east London, in partnership with Qatar’s sovereign wealth fund. In 2019, along with Dutch pension fund APG, Delancey bought the Earl’s Court exhibition and surrounding land in west London for £425 million.

The battle between Ritblat and HMRC centers on a trust fund that was set up in 2007 when Delancey raised €1.5 billion from investors for its flagship client fund, called DV4 Limited.

The DV4 Trust is an employee benefit trust and holds Delancey employee profits, also known as transferable profits, from the DV4 Limited investment fund. Between the two entities is the British Virgin Islands partnership. The DV4 Trust owns the majority of the partnership and, in turn, a share ownership partnership, allowing it to enjoy 20% of DV4 Limited’s profits if the fund achieves at least 7% annual returns.

DV4 Limited did not cross the 7% barrier until the financial year ended March 2014, according to June HMRC court filings, citing DV4 Limited and partner accounts. Carrying interest then began to accrue, totaling £133 million in March 2015.

Employee benefit trusts were once widely used as a means of tax avoidance. Companies will receive a tax deduction on payments to EBT, but employee beneficiaries will have no immediate corresponding tax liability.

HMRC has controlled EBT for more than a decade, and in 2011 legislation was enacted to further curb abuses. “HMRC has challenged EBT for a number of years and almost always won,” said Catherine Gannon, founder of law firm Gannons.

Between 2011 and 2015, HMRC invited employers to resolve all liabilities related to those trusts through negotiation rather than litigation. In 2015, DV4 Trust joined the settlement program.

The trustee of DV4 is Harbor, a fund services company based in the Cayman Islands. Harbor did not respond to a request for comment. The legal and tax representatives of the trustees are longtime Delancey advisors EY and Olswang. HMRC said both advisers have also acted on behalf of Delancey in settlement negotiations.

HMRC in a court filing in June alleges EY downplayed the importance of the DV4 Trust in settlement negotiations by mentioning only £1,000 of assets it had in 2008 and not telling HMRC. that as of March 2015 it had an equity position of £125 million.

The court filing, citing from a summary of “key facts” provided by EY, mentions that DV4 Trust invested £1,000 in a “BVI partnership” with third-party investors who had made make equivalent investments. The citations in the filing do not describe the partnership as a vehicle for the interest bonus transferred from the Delancey fund.

HMRC alleges the document has the false appearance that the partnership is an arm’s length commercial investment.

The trust in 2008 allocated partial ownership of the BVI partnership to specific Delancey employees. EY has proposed a payment of £400 to be paid by Harbor on the basis that in 2008 the value in the trust was unchanged from the original £1,000 invested by the trustee.

“It can be considered that there is no change in the value of the investment [the trust hasn’t received any return whatsoever]. In addition, since a third party has paid an equivalent amount, and since that amount also represents 100% of the trust assets, we consider this reasonable in the context of a voluntary settlement.” EY contributor Jim Wilson wrote in an email to HMRC in June 2015.

HMRC accepted the offer and agreed to a payment of £400 with provisions preventing further seeking of additional taxes from Delancey or any of the trust’s beneficiaries.

Delancey is no stranger to getting into fights with tax officers. Ritblat’s former fund, DV3, drew the ire of HMRC over its £2.6m stamp duty avoidance scheme with its acquisition of the £65m Dickins & Jones building on Regent Street in central London in 2006.

The plan involved transferring the asset to a BVI partner on the same day DV3 bought it for the same price. HMRC lost twice in the tax courts before winning the Court of Appeal in 2013.

The cause of this latest controversy is Ritblat’s 2015/2016 tax return, filed in January 2017, according to HMRC filings. The return revealed a £10m payout from the DV4 Trust in January 2016.

Tax authorities opened an investigation into his tax returns in December 2017, beginning years of legal wrangling. In January 2018 representatives for Ritblat presented HMRC with a letter from Harbor stating that they as trustees had acted on its discretion to award him £10 million.

In February 2020, attorneys for Ritblat provided HMRC with accounts for the BVI partnership and DV4 hedge fund organization, prepared by EY, HMRC filings said. The transferable interest shares of the partner in the fund organization as of March 2015 were worth £133 million and the DV4 Trust owns a 95.5% stake in the partnership.

In its filing, HMRC said that if it had had the full picture of the DV4 Trust at the time, it would not have agreed to the £400 payment.

The stakes for Ritblat and Delancey are huge.

Ritblat initially went to tax court to force HMRC to close his claims for the three years of his personal tax returns from 2015/16 to 2017/18. He was successful, but the closure notice HMRC issued in September 2020 said he owed income tax on a £18.4m payment from the DV4 Trust over those three tax years. The notices accompanying the side letters note that HMRC could make further arguments that he owes other taxes on payments that would make his liability much greater.

Ritblat appealed against the closure notices in tax court. He also sued HMRC in the High Court in 2021, seeking a claim that the 2015 agreement prevented HMRC from making “threats” that he claimed to have done in party letters.

HMRC denied making threats and filed a counterclaim in that case in June of this year. The tax authority has argued that if the 2015 settlement were upheld, then Delancey and Harbor would be entitled to damages for lost tax revenue. 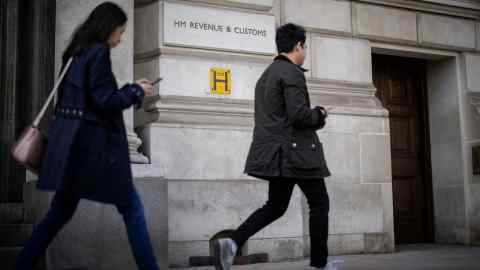 Ritblat and Delancey will submit a response by the end of September.

The HMRC protest statement notes that other Delancey employees sought to use the 2015 settlement to avoid taxes on DV4 Trust payments, including chief executive Paul Goswell, a board member at King’s College London.

Earlier this year, HMRC opened a new front in the fight, suing Delancey himself over a £32m national insurance contribution it claimed was due on top of a total of £141m paid by the DV4 Trust. implemented from 2016 to 2020. The case is still pending. of other cases.

After the endless delay and empty, the Dispatch game seems to be dead