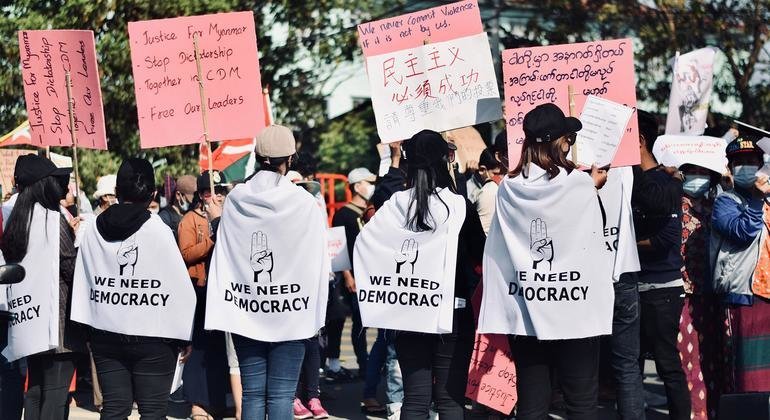 High Commissioner Michelle Bachelet told 49th session of Dong Nhan Quyen Association (HRC) that the country’s humanitarian crisis continues to widen due to the systematic brutality of security forces known as the Tatmadaw, which has sparked pre-existing armed conflicts in the countries. multiethnic.

“The economy is on the verge of collapse. More than 14.4 million individuals are currently assessed as being in humanitarian need”, OHCHR growth, predicts that “food scarcity will increase sharply in the coming months.”

Meanwhile, the United Nations Development Program (UNDP) predicted that “the combined effects of the coup and COVID-19 The pandemic could plunge almost half of Myanmar’s population into poverty this year.”

However, despite the harsh repression, many citizens continued to resist the military coup.

Although most protests have been peaceful, including the ‘Silent Strike’ as well as other forms of protest and boycott, the military has been met with dissent. ​by lethal force, mass arbitrary arrests, and torture.

“Reliable sources have documented the deaths of more than 1,600 individuals, many of whom participated in peaceful protests. At least 350 of those killed died in military custody, more than 21% of all deaths,” Ms. Bachelet said.

As of February 1, 2021, more than half a million people have been forced to flee their homes, with at least 15,000 reported to have fled the country. – add to the nearly 340,000 internally displaced people before the coup and over a million refugees, most of whom are mainly Muslim Rohingya who have sought refuge in Bangladesh

Disproportionate military crackdowns, in clear violation of international human rights and human rights law, have taken place in the Sagaing and Magway Regions, as well as in the Chin, Kachin, Kayah, Kayin and Shan States.

“Tatmadaw has targeted both armed resistance groups and civilians with armed helicopters, airstrikes and indiscriminate use of force,” she said, as a strategy known as the “four-way street” cuts” continues to “punish local communities because they have assumed pro-arming elements. ”

“This The attacks occurred along with mass arrests, summary executions, and torture. ”

World Health Organization (WHO) has also recorded at least 286 attacks on medical facilities and staff since February 2021.

A country on the brink

With the economic, educational, healthcare and social protection systems broken down and valuable development achievements destroyed, the High Commissioner voiced his concern that the State was on the verge of collapse. pour.

“I remain deeply concerned for the safety and rights of human rights defenders and other civil society organisations,” she said.

“There is hardly any civic space left across the country. Tight surveillance, including by digital means, increases the risk for activists in all military-controlled areas. ”

Almost no civic space left around the country – Michele Bachelet

The military uses arrests and detentions as “a tool to target and intimidate those against them,” she continued, citing reliable sources when saying security forces detained them. holds more than 12,500 individuals, of which 9,500 remain in custody including at least 240 children.

“Many of these people have been tortured and mistreated.”

And the plight of the enduringly persecuted Rohingya remains dire, with no end in sight.

“The Rohingyas in Myanmar are denied freedom of movement and access to services,” she said, “there is no permanent solution for internally displaced people, nor… favorable conditions for the safe, sustainable, decent and voluntary return to Rakhine State”.

Ms. Bachelet said that Myanmar’s military forces are violating human rights with the punishment they violated four years ago during the violent persecution against the Rohingya people and against other ethnic minorities in the decades. previous century.

“A political path will be needed to restore democracy and civility,” she said, “but such dialogue” cannot and does not replace the urgent need to hold accountable responsible for serious human rights violations”.

While noting that Senior Lieutenant General Min Aung Hlaing “did not prevent the violence or allow adequate humanitarian access”, the High Commissioner said: “The people of Myanmar deserve, and deeply demand, justice.”

She called for urgent action by the international community and all parties to stop the violence and meet the humanitarian needs of the country.

“The people of Myanmar demand that their voices be heard and that they have a say in their democratic future… It is time for all of us to listen to them.” CRTC overstepped in response to use of N-word on Radio-Canada program, attorney general says