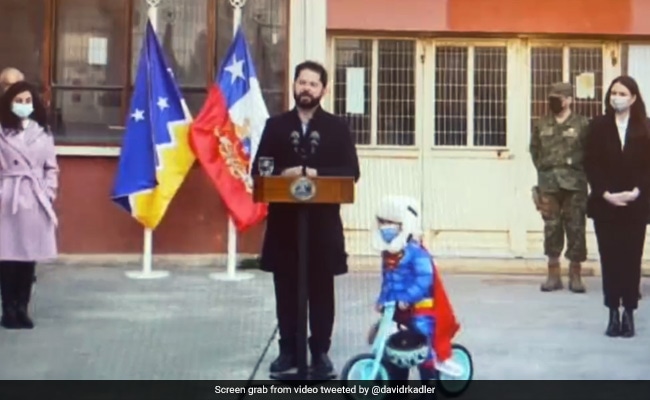 A boy in a superhero costume walks around the President of Chile.

“Superman” suddenly appeared in the speech of Chilean President Gabriel Boric. No, it’s not the Man of Steel in real life, but a kid in a superhero costume filmed cycling around Mr Boric. The president was speaking after voting for the Constitutional plenary elections, according to local outlet 24 Horas but it was the boy who caught the attention of those present. A video of the child’s antics is going viral on social media.

The clip was recorded last week when Mr Boric was calling on Chileans to vote in favor of the new constitution, but was ultimately rejected by a majority, Reuters news agency reported.

Superman surrounds Gabriel Boric after he submitted his vote in the global web today pic.twitter.com/2Tk63noO62

The president was rambling on, but a kid, wearing a red cap and a superhero blue motorcycle, rode around him on a blue balance bike, as seen in the video.

After a few laps, he stopped to listen to the President but then continued to ride his bike, seemingly oblivious to what was going on. His blue helmet hangs from the handlebars of his bike.

The video has received more than 1.33 million views on Twitter and made many users bewildered.

One user said: “At least something good happened today. “Why don’t we talk about this more?” commented otherwise.

About 7.9 million Chileans voted against Sunday’s draft constitution against 4.9 million who voted in favor, a blow to the country’s 36-year-old President, who has backed the move. passed, according to Reuters.

The vote is seen as a gauge of political temperature for Mr Boric, who took office in March promising economic and social reforms, although has been criticized for high inflation and economic uncertainty. .

Britain's new prime minister attended this B.C. school for a year in the late '80s