Farmers use agrochemicals on crops to ensure a bountiful crop.(Representative)

Along with infrastructure, Agriculture is also the backbone of the Indian economy.

The sector employs nearly half of India’s population, accounting for about 16% of the country’s gross domestic product (GDP).

Despite all this, the sector has seen very little reform in decades. India used to lag behind in the agricultural sector due to large-scale famines and frequent droughts in some regions. Lack of technology is another reason.

Currently only efforts are being made to increase production through modern methods through the provision of subsidies and fertilizers. These reforms are long overdue.

So you ask what is the most essential part of farming? The answer is agrochemicals.

Farmers use agrochemicals on crops to ensure a good harvest. To meet the food demand, the innovative use of pesticides chemicals will be needed in the coming decades.

With that in mind, let’s take a look at the top agrochemical companies in India.

With a solid presence in both domestic as well as export markets, the company has maintained its leading position in the agrochemical industry.

The company’s presence in the agrochemical space spans more than five decades, during which the company has built a healthy mix of products.

Over the years, PI Industries has recorded strong revenue growth and maintained an operating margin of over 20%.

Let’s look at its financial performance: 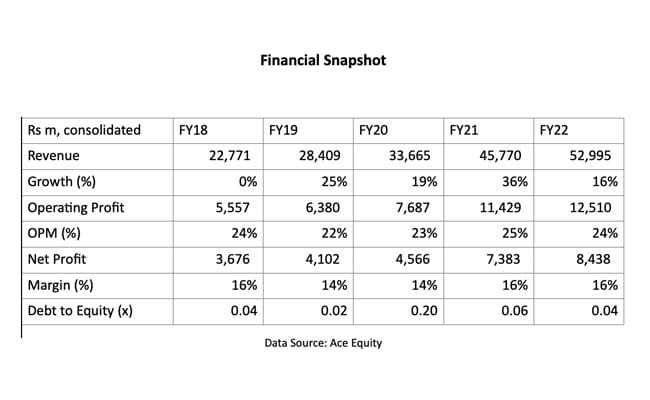 The company maintains a strong research presence through its R&D facility in Udaipur, which has a dedicated team of over 400 researchers and scientists.

During its September 2022 earnings call, PI Industries highlighted that it launched 5 new products during the quarter while another 2 are scheduled for the end of December 2022.

It is also in the process of expanding the depth of its products in new market segments such as Taurus, a revolutionary nematode, and Tomatoough, a unique biological product.

Over the next two quarters, PI Industries expects 3 to 4 molecules to be commercialized from the agrochemicals segment.

In terms of stock performance, long-term investors in PI Industries are making sweet gains. Over the past five years, the stock has grown 296 percent. 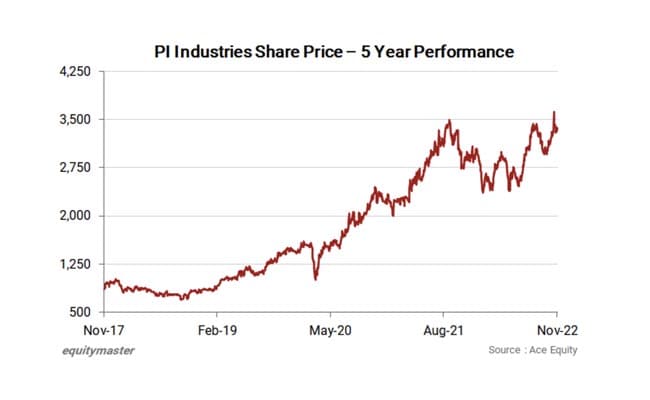 The company is the sole Indian manufacturer of several techniques such as Folpet, Thiocarbamate and Herbicides. It produces herbicides, fungicides, and active pharmaceutical ingredients (APIs).

It derives almost 95% of its total revenue from the pesticides segment while the rest comes from pharmaceuticals.

Over the years, the company has developed a niche portfolio of agrochemical products. It has also diversified its product portfolio over the years. This allows it to reduce business risk.

As a result, revenue grew steadily while operating profit margin also remained above 20%. 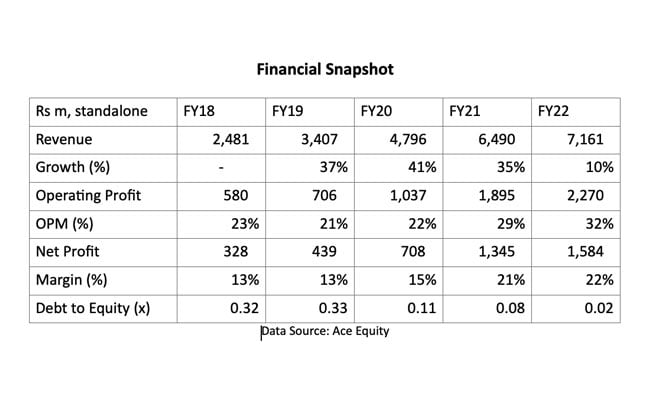 During its September 2022 earnings call, the company said that two of its production blocks at an existing facility will be used for intermediates & herbicide engineering.

Meanwhile, its Hamirpur plant will start operations next year after March 2023.

Pesticide India listed in July 2021. Shares have fallen 27% since listing. 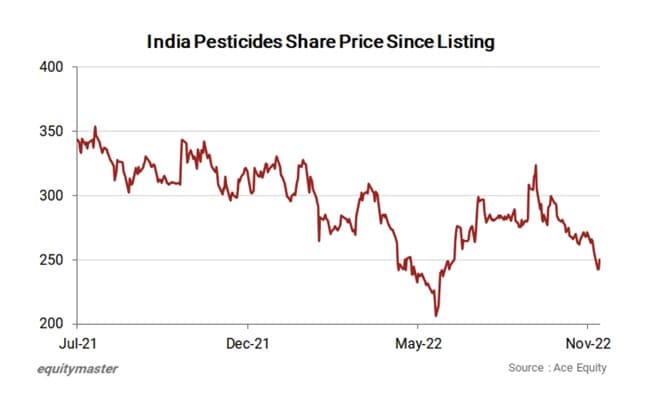 With several agrochemical products about to expire, the company will benefit from the many opportunities that will arise.

The company manufactures a wide range of agrochemicals such as herbicides, pesticides, fungicides, plant growth regulators in various forms of liquids, dusts, powders and granules.

It has a presence all over India with a strong distribution network.

By having a strong product system along with strong R&D, the company has recorded healthy growth in revenue and operating margin over the years.

The company has long-standing relationships with global innovators including Nissan Chemicals, FMC Corporation among others.

Earlier this month, it established a new R&D and training center in Haryana.

It is also setting up a manufacturing plant in Dahej (cost around Rs 3 billion), which will help increase revenue visibility. In the past, the company has stood out for its timely capacity expansion and reverse integration.

This is where it gets more interesting. Although the business is capital intensive and requires significant branding and marketing costs, Dhanuka Agritech maintains a near debt-free balance sheet.

As for stock performance, Dhanuka Agritech has shown poor performance even when we look at a long-term period of 5 years.

But if we take its three-year operating results, the company turned in a profit many times over. 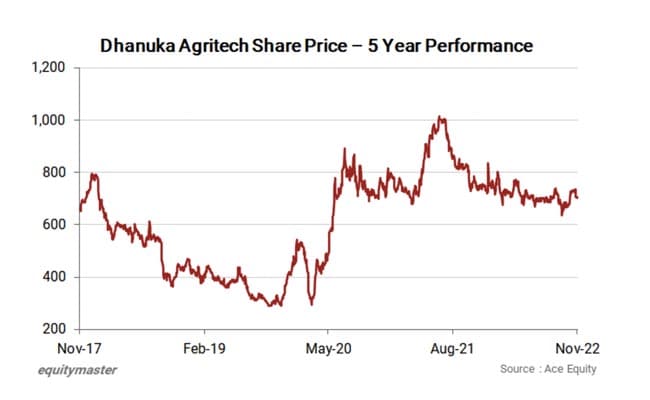 The redemption price is 20% higher than the current share price.

Next on the list is the recently listed small-cap Heranba Industries.

The company is engaged in the production of a wide range of agrochemicals and public health products for pest control.

In the domestic market, PI Industries, Sharda Cropchem, UPL, Rallis India, Dhanuka Agritech and some of its major customers.

It holds about 50% share in the export market, but the past year has seen lower exports due to the lockdown in China.

Thanks to a strong product portfolio, strong distribution network and ability to launch new products, the company has over the years posted strong financial positions.

The management has planned a capital investment of around Rs 2-2.5 billion over three years.

The company is expanding into the production of pesticides, insecticides, fungicides and herbicides (with a major focus on technical expansion). According to management, 70% of investment capital will be for new products and 30% for expansion of existing products.

Regarding the stock’s performance, after a bumper listing (43% higher than the issue price), the stock was under pressure in 2022. 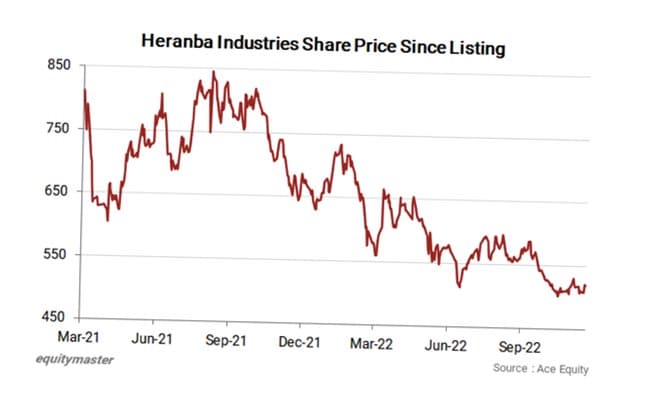 With more molecules to be patented in the near future, the company aims to capitalize on significant growth opportunities in the agrochemicals segment.

Last on the list is Paushak, the strategic supplier of phosgene and its derivatives.

It is one of the few players licensed to produce phosgene gas, which is heavily restricted by the government. This is because phosgene is highly toxic.

Phosgene’s toxicity makes it suitable for use in insecticides, insecticides and herbicides.

Paushak is part of the Alembic group of companies in Gujarat, India. Alembic is the oldest pharmaceutical company in India founded in 1907.

The company has recorded high operating margins over the years thanks to capacity expansion. 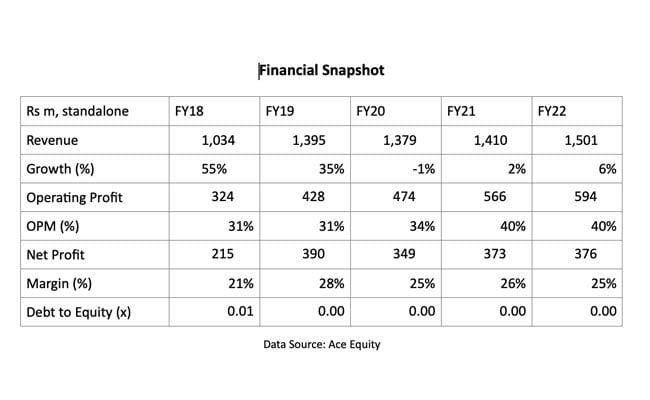 This year, the company completed its first round of investment and tripled its phosgene capacity. It also commissioned a new phosgene plant.

However, the company’s management said in an interview that the high profit margins seen last year were unsustainable and would be around 20% for the current financial year.

Paushak shares are currently trading near a 52-week low. This stems from poor management commentary and muted Q2 results.

Paushak’s journey is a kind of story from poverty to riches.

Even if we calculate the performance over 5 years, the stock is up 800%. 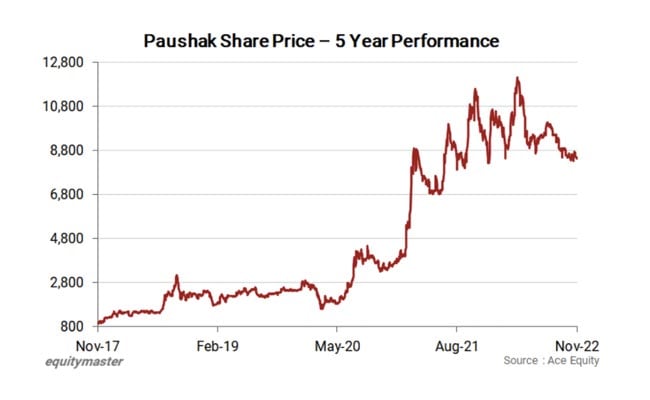 One of the secrets of its success is expanding its customer base beyond the pharmaceutical industry.

Even after years of facing fluctuations in raw material prices, the company’s profit margins have not fluctuated significantly supported by strong operating performance. This is an example of how a fundamentally strong stock stand tall even in critical moments.

Take a look at the table below for a comparative analysis of these companies in terms of valuation and rate of return. 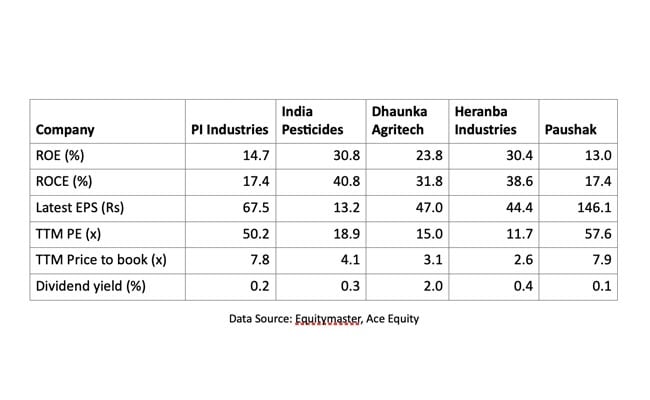 India’s new focus on agriculture and agrochemicals sector could attract investors in these stocks.

And if a major change is announced in the upcoming Budget, these could be the main beneficiaries…

(Disclaimer: This article is for informational purposes only. It is not a stock recommendation and should not be treated as such.)

This article is compiled from Equitymaster.com

Tech layoffs globally, but big hires in Fintech and e-commerce in Chennai

Samsung hires 1,000 engineers from top universities for R&D centers in India next year Federal Bank amends FD interest rates, now offers up to 7.75% with a term of 700 days Interest rates have skyrocketed in 2022. Here’s how much you have to pay extra to borrow – Country